Tips to Prevent and Unclog Shower Drain Blockages In Your Home

In contrast to a popular opinion that you should not build a shower room upstairs, there isn’t any difference between having it installed in the first floor, second floor, or any other floor as long as the plumbing installation is done properly in accordance to building codes. Each will result in the same likelihood you will eventually need to unclog shower drain blockages at some point in time. If you are concerned about leaking issues, or a clogged drain, such problems are almost never associated with location. A clogged drain is more likely caused by the lack of drain cleaning, maintenance, or faulty a installation. 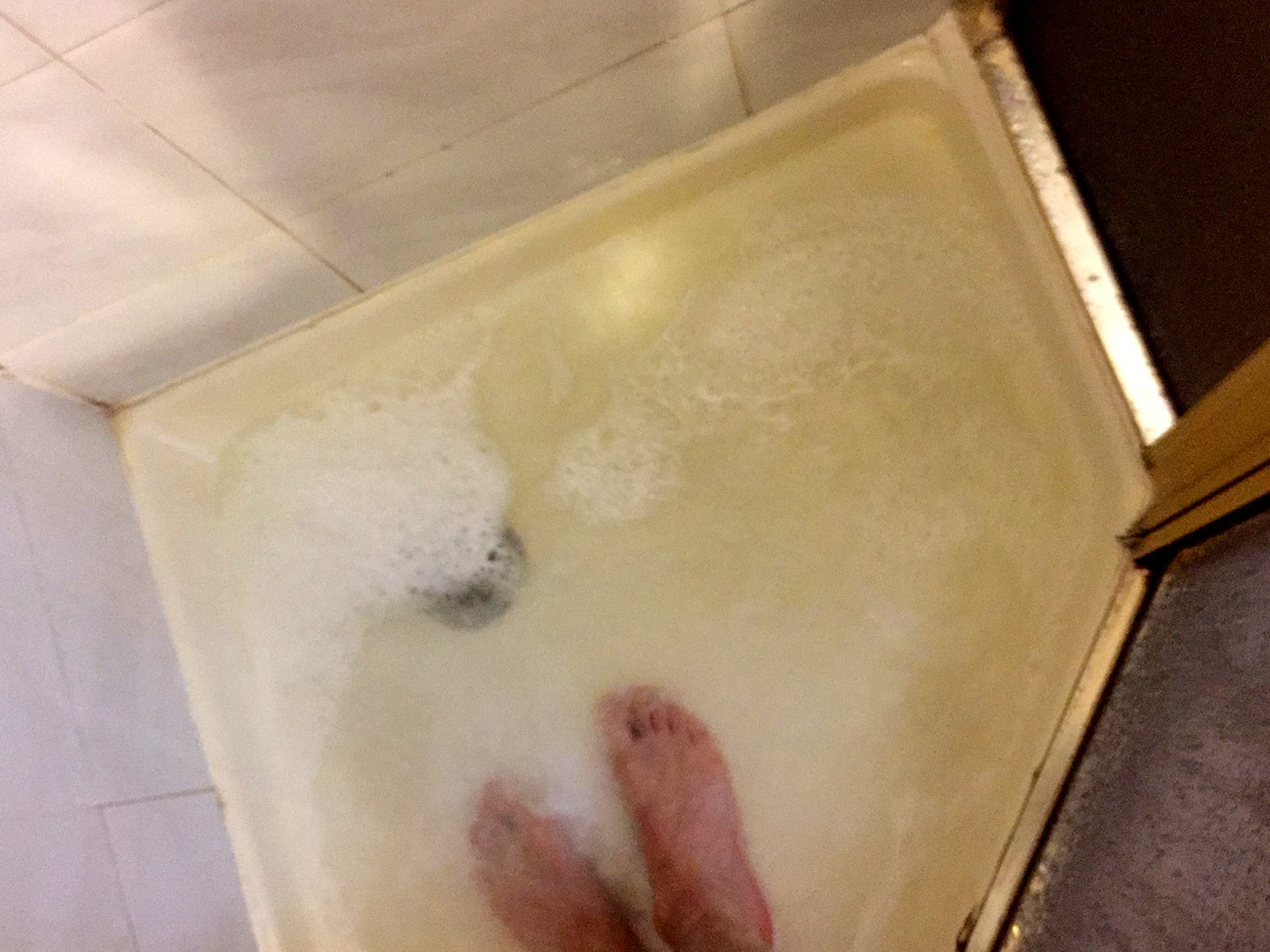 A slow shower drain affects your quality of life

Depending on the layout or design, you can call the space either a shower or wet room. The former typically has at least two separate drains because one of them is dedicated to handle wastewater only from inside the shower cabin. Instead of using the same drain as the rest of the bathroom does, a shower cabin comes with its own tray/base connected to a drain pipe underneath.

Ideally, the entire shower cabin is watertight, which means wastewater remains inside. Therefore, it needs a separate drain not only for wastewater to go, but also for access when maintenance, repair, or replacement is required. If there ever comes a time when you need to unclog shower drain clogs, you may need access to the plumbing installation underneath the shower tray.

In a wet room (shower stall), there is probably no more than one drainage opening. It is usually located in the lowest part of the space. The shower floor is sloped to the drain, so wastewater flows more easily. A shower drain, as the name suggests, is the drain installed inside a shower “cabin”. Wastewater flows through a hole in the tray connected to drain pipe, and p-trap underneath. There are three most popular types, although they all serve the same function.

1. Round or square drains are the most common

These are the traditional shapes. They are most popular thanks to their efficiency and affordability. Such shapes come in many different variations, but that mainly pertains to the grating design. Some fancy ones give a more luxurious look. 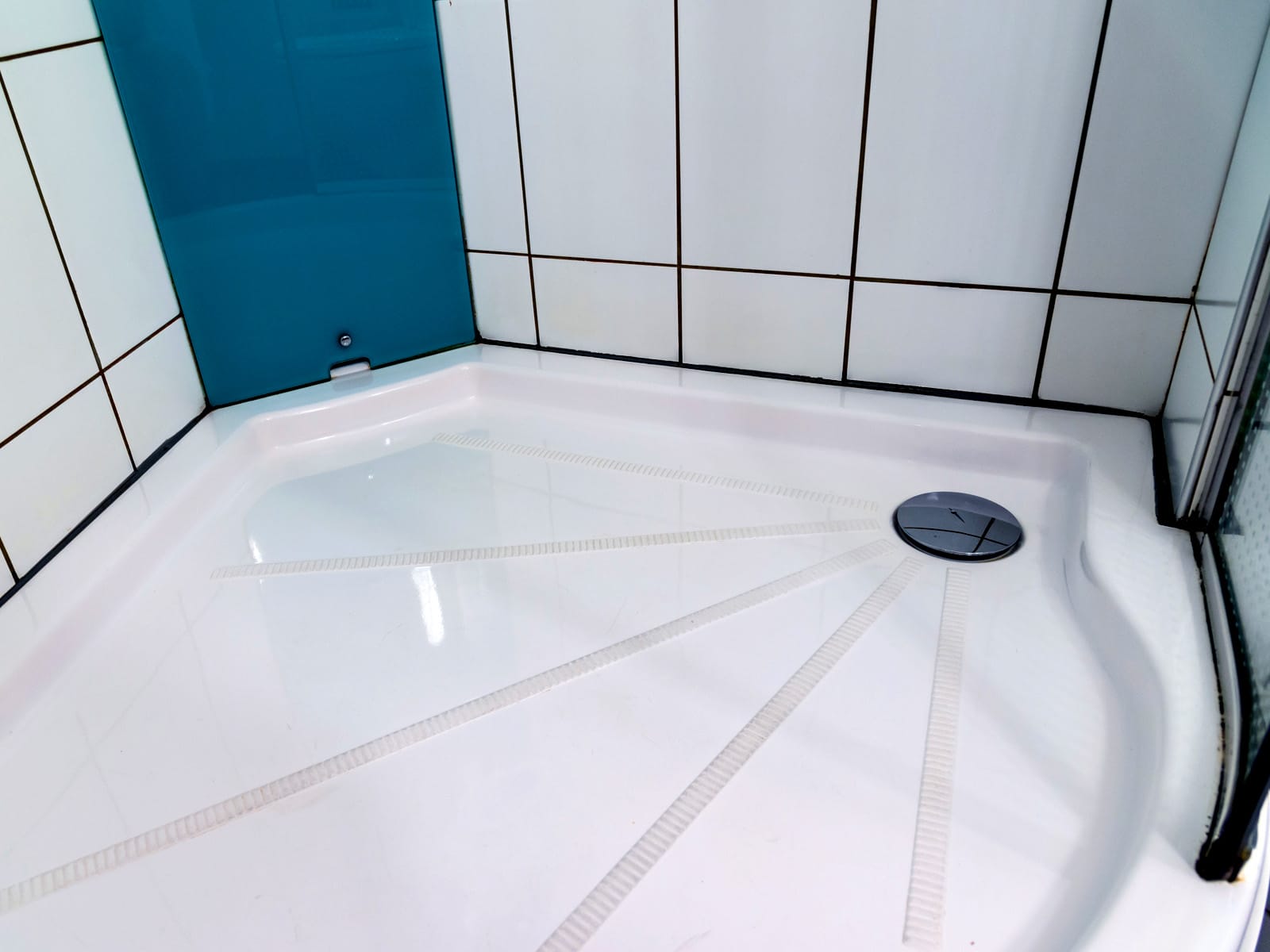 2. Linear or “Trench” drains are used in public or commercial spaces

Also known as channel or trench drains, it comes in a rectangular shape. It is often installed flush to a shower tray floor. Unlike the regular square or round models, which often are installed in the middle of shower tray, the linear type allows for floor sloping to one side only without sacrificing efficiency. In fact, the length of the rectangle can cover almost an entire side of shower tray for quicker draining. A linear, or trench type shower drain is frequently used multiple shower stalls are being used, such as in a gym. 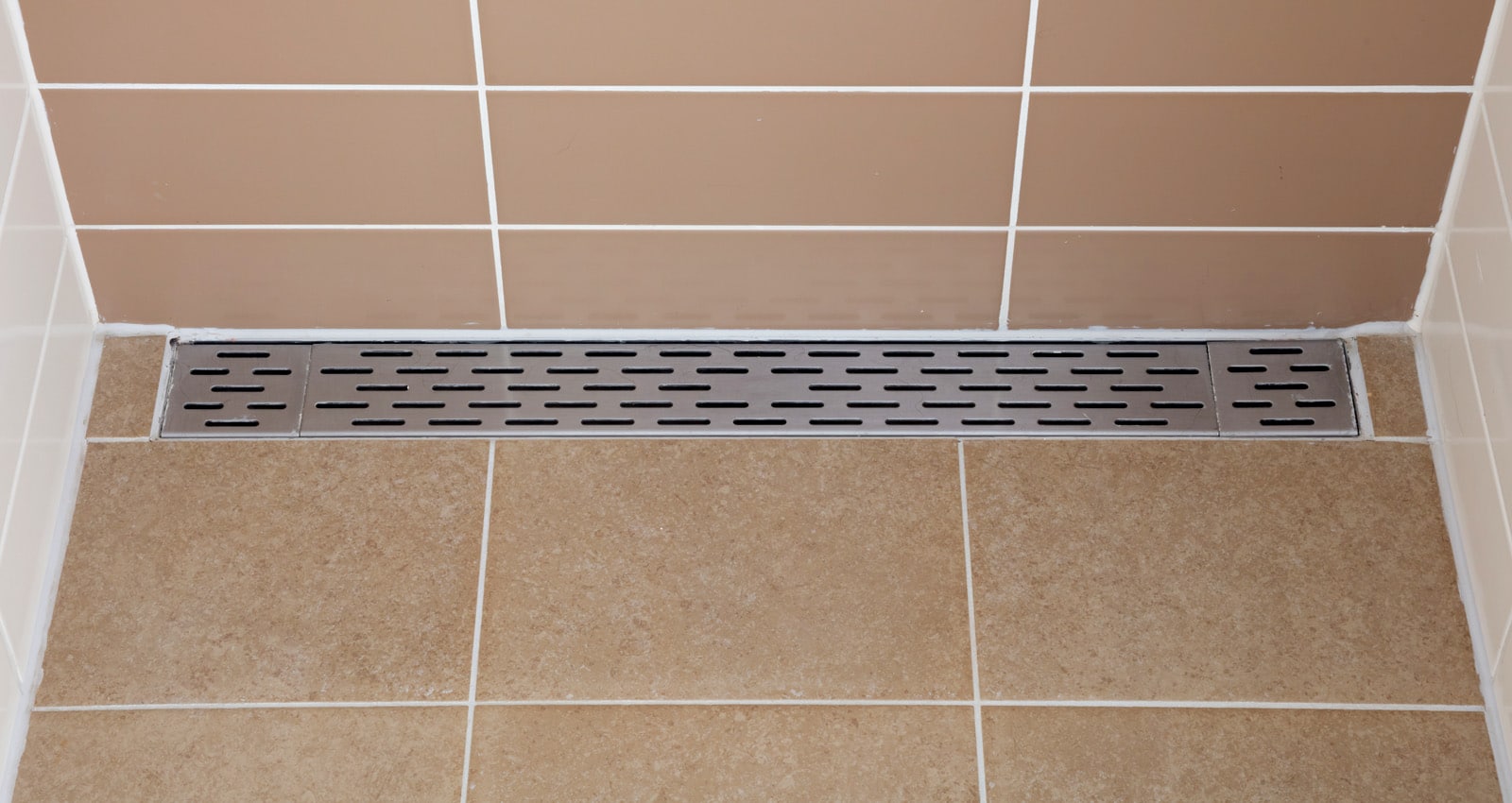 The basic shape of a tile-top linear drain is similar to that of the linear model. The difference is that it offers a slot to install a tile on the strainer, in a way that it does not obstruct wastewater flow. The end result is a sleek seemingly invisible drain given the additional tile is matching the texture or color of shower tray surface. 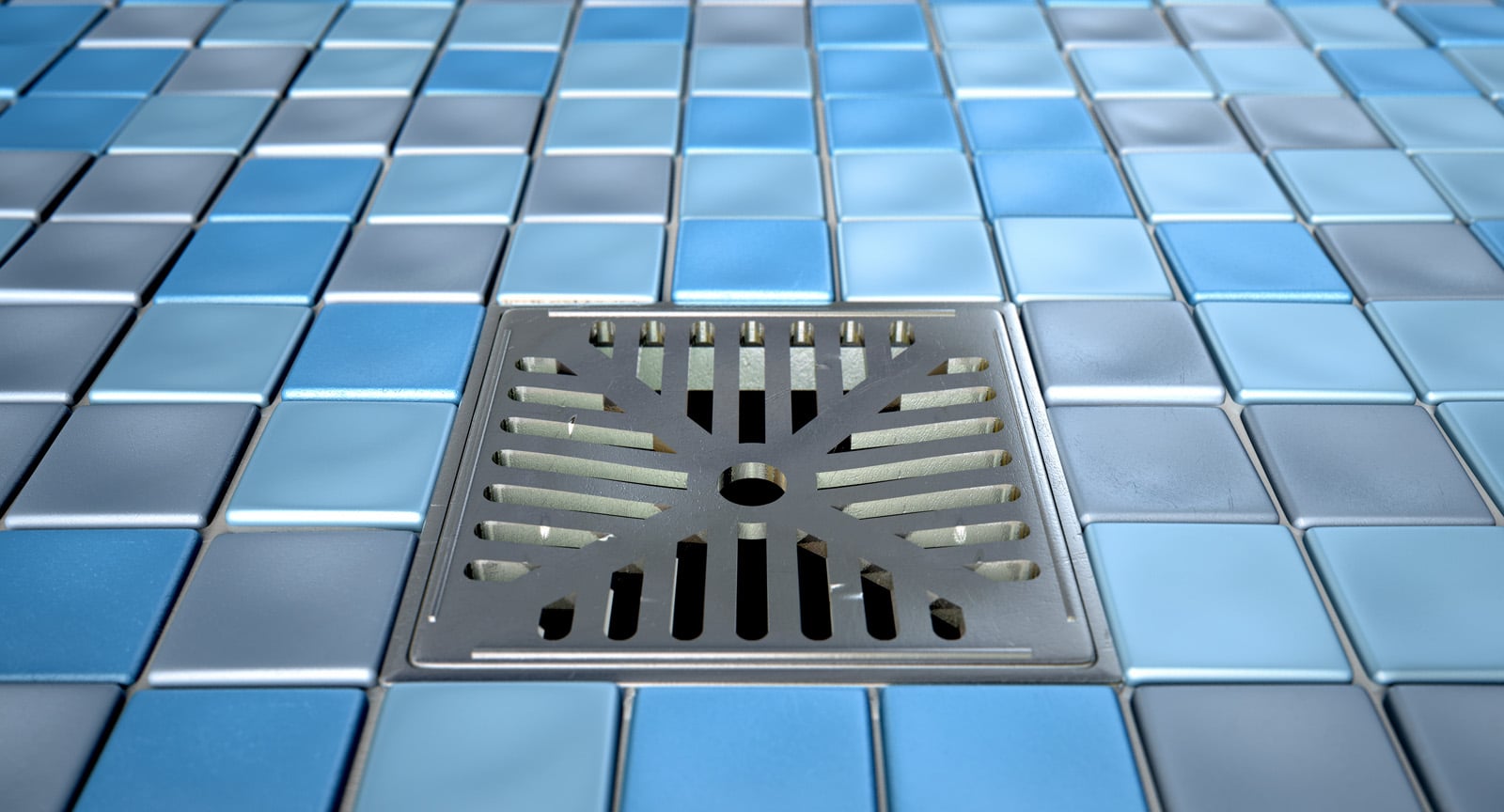 Most shower drains are made of rust-resistant materials such as PVC, stainless steel, brass, or a combination of these. During the first few months of installation and usage, the drain inside a shower cabin should work without any issue. Assuming the drain cover offers a good filtering function to prevent large solid object from entering the pipe, nothing can block the flow of wastewater into the drain pipe. With regular cleaning and maintenance to get rid of dirt, hair, etc. on the drain cover/grating, you have very little to worry about. However, everyday usage over time, combined with frequent disregard for regular checks, is likely to cause a clog in the drain.

A basic cleaning should involve removing the drain cover and wash away all visible dirt from it. Cleaning can also be done by hand to remove clumps of hair, etc. The good thing is that a shower drain is not that much different from a sink drain; the design is familiar so you should not find any problem taking the cover apart and do a simple cleaning. Some of the most common objects you will find include hair, soap scum, and perhaps a little bit of dirt. All of these items should go away with a single wash. Things get trickier when the drain is clogged due to dirt inside the pipe, or p-trap. 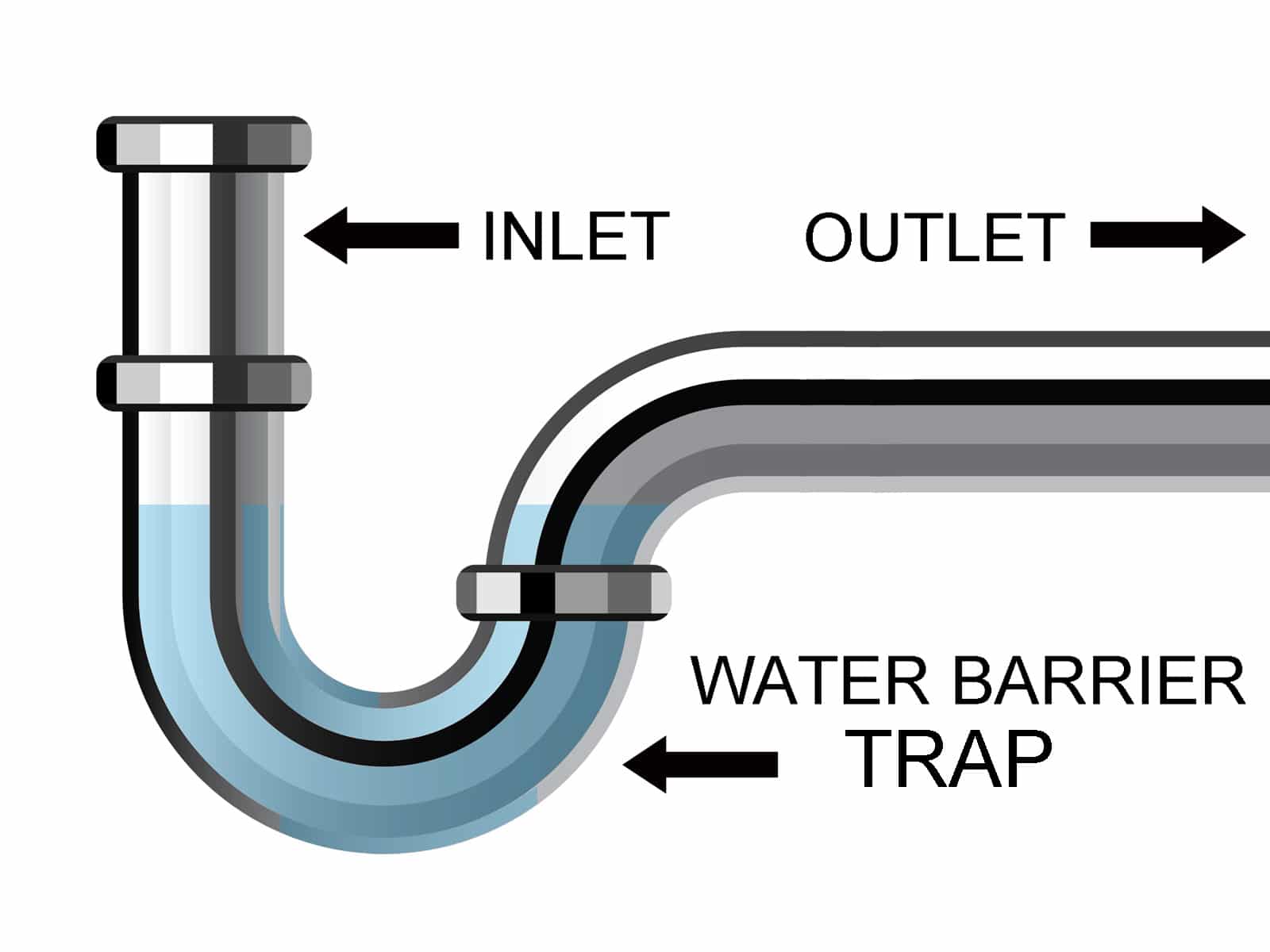 In such situations, it is probably necessary to remove a lot of plumbing parts to unclog shower drain blockages. Remember that the drain is connected to a p-trap beneath the shower tray drainage hole. The p-trap can be either be a one-piece pipe, or several short pipes assembled together. The latter is easier to take apart and put back together afterward. There should be a crawl space or access door to reach the p-trap. If the shower room is on the first floor, the access is usually easier from the basement. If this sounds like ti can get complicated, you are correct. In most cases calling a professional plumber to locate, expose, and clean a P-trap is advisable. 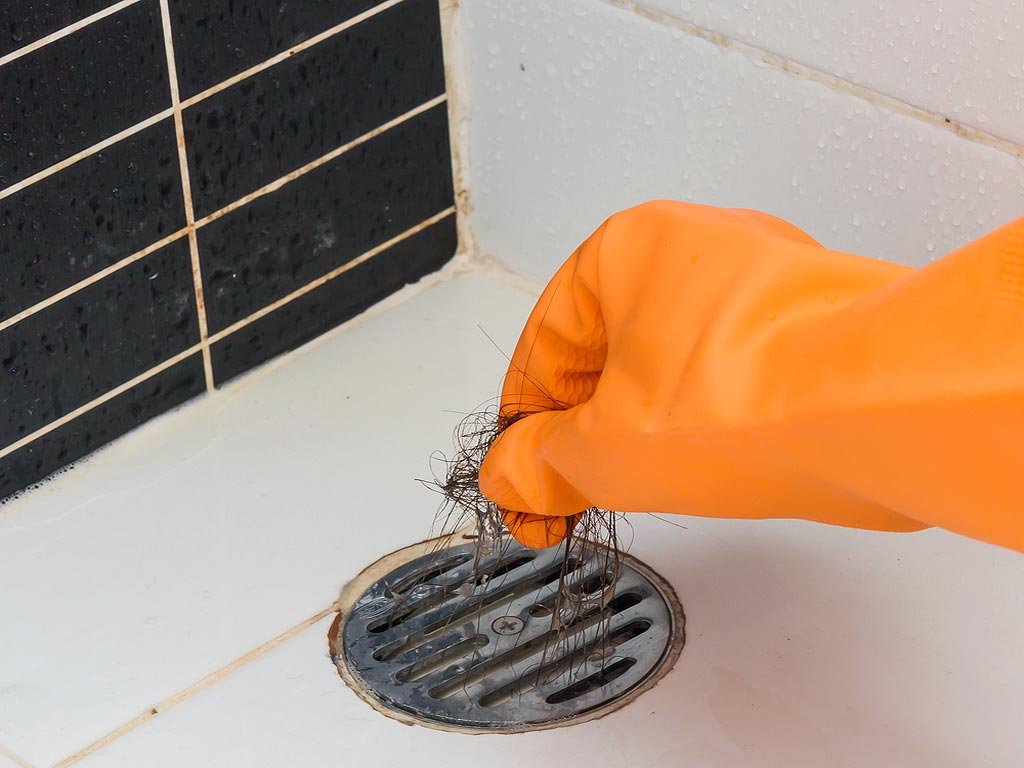 Periodically cleaning hair out of the strainer prevents clogs

Before you get into the trouble repairing the p-trap to unclog shower drain clogs, it is always best to try some simple methods first. Try using one of first basic 4 first methods first:

Anytime you encounter slow draining or complete blockage of the drain, plunge the drain before everything else. You may need to remove the drain cover using a screwdriver or pliers. Plunge vigorously for about a dozen times before you pull away the tool from the drain opening. The method is usually effective for partial clogging.

If plunger does not work, a plumber’s snake is the next method to try. Be careful when inserting the auger to prevent scratches to the shower base. It may take several attempts to remove the blockage completely and unclog shower drain.

A mixture of hot water, baking soda, and vinegar is an excellent alternative to harsh ready-made chemicals to unclog shower drain. Pour boiling water into the drain then continue with baking soda and vinegar. Finish it with another cup of hot water.

You can technically use a power washer to unclog shower drain, but it is not truly advisable Even with that said, you may also need special attachment to the water hose to avoid making a messy shower cabin in the process. A better alternative is a professional plumber using a specialized tool called a “sewer hydro-jet”. A water jet is basically a modified version of power washer, but specifically designed to blow out drain clogs.

If all else fails, one has to access the plumbing installation underneath the shower cabin. Then remove the p-trap using screwdrivers, pliers, and perhaps a wrench. Dirt, including grease, and soap scum, can accumulate and harden in the trap. This can make it very difficult to remove unless you remove the P-trap first.

Removing the clog from a p-trap (or maybe further location along the drain pipe) solves only half of the problem because you have to put everything back together afterward. Depending on the room layout, and clog location, you may also need to take apart the shower base or even some floor tiles during the job. Assuming you do manage to unclog shower drain, you don’t want to leave the room still in mess at the end of the day. And reinstalling shower base or refitting floor tiles is not as easy as it sounds. Just like anything done with DIY approach, untidy workspace and non-adherence to building code are prevalent risks.

It doesn’t take much though to know why you should call a professional. But in case you need convincing, read the following.

Why call a professional to unclog shower drain stoppages?

Maybe most importantly, using a professional will avoid 3 major pitfalls:

An experienced plumber or drain technician will not leave a mess on your shower after the job is done. Cleaning up after the repair is part of the job, meaning the job is not done until the workspace is restored to the way it was. The plumber is there to unclog shower drain. Not to ruin the shower room floor and ignore the mare’s nest from the job. Feel free to contact the Balkan Drain Team today for that “professional experience”.