A sewer camera, also commonly referred to as drain inspection camera, is essentially a CCTV system designed in a small enough form factor to go through a pipeline in a plumbing installation. Unlike most regular monitoring cameras, however, it is connected to a control panel with which a technician/plumber can insert and steer the camera from an above-ground location. The camera feeds real-time videos to a screen and saves the footage into a memory card for further analysis.

The first CCTV system was installed by Siemens AG in 1942 at Test Stand VII in Germany. It was mainly used for observing the launch of the V-2 rocket. The V-2 was the world’s first long-range guided ballistic missile, and was developed during World War II. About 7 years later, the first commercial CCTV system was available in the United States, called Vericon. It was not a heavily publicized invention, and just about the only thing the public knew was the that anyone could purchase and install Vericon without a government permit. CCTV is now used for various applications including but not limited to security systems, documentary practices, video-telephony, traffic safety, and in specialty uses as well. CCTV can be used basically for any activity which requires remote surveillance, and this includes pipeline inspection in plumbing system.

Would you prefer a full Color HD image, or an old grainy analog B&W image? 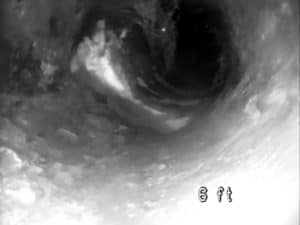 The answer of course, is obvious, and most everyone currently watches full color HD television, movies, and videos. Then why pay for a grainy, hard to see, analog, black and white drain inspection camera video? Just like for your other viewing, you should demand modern equipment to properly evaluate your drain system. You should never have to trust an outside contractor to interpret a poor quality sewer video for you. That is why paid to have a sewer video done in the first place; to gain a clear understanding of your drain system and its functionality for yourself.

Differences in a drain inspection camera and service provided

Just like any tool or appliance, the use, type, and quality of a drain inspection camera varies widely and in many respects. Modern equipment far outshines older camera models, and the drain technicians skill-sets vary widely as well. A drain cleaning company’s policies also are a major factor that affects everything from a positive end result, to the final price.

As we all know HD imaging is far superior to old analog images. In a poorly lit area, such as an underground drain line system, the difference is even more pronounced. When critical plumbing repair decisions are being made, obviously a HD video should be the one that decision is based upon. 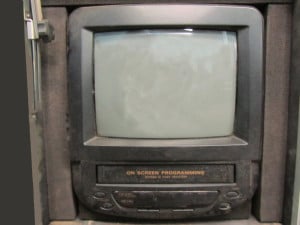 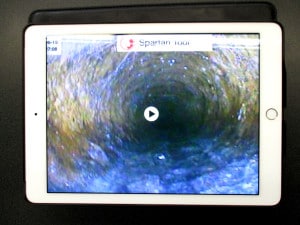 Previous standards of video resolution using VHS media are about 320 x 240 pixels resolution. Top of the line older equipment may produce slightly better quality. However, a modern drain inspection camera can record video in Full HD resolution (1920 x 1080 pixels). One of the major benefits is that the video can be zoomed in without losing image quality.

Fill color versus black and white

It may be hard to believe in this modern age, but many drain cleaning companies still use black and white drain inspection cameras. Not only is a color image clearer, it greatly helps to discern what the condition of the pipe is, and the nature of any pipe issue. Simply put, black and white images can and do appear muddled and inconclusive. Trust a drain cleaning company that prides itself on modern equipment, and highly skilled drain technicians.

Unlike an older drain inspection camera, digital cameras can instantly email or text the complete sewer video to you, or be shared. There is virtually no waiting time to understand the nature or extent of your drain pipe issue.

Unlike older cameras, modern sewer cameras have a pipe locating feature. This feature routinely saves excavations being made in the wrong location, or incorrect assessments of other sorts.

What we all hate most are unexpected charges from a contractor. With that in mind, one would think the cost of a sewer video would include a copy of the video itself. Unfortunately that is frequently not true. Many drain companies charge for a DVD copy of the video. Knowing the full charge for your drain service up front may not be easy, but demanding use of a modern drain inspection camera makes it easier.

How does a drain inspection camera work?

Pipeline video inspection involves running a controlled video recording device through wastewater pipes to check for issues such as clogs, cracks, or dislodged pipes. This device is connected to a probe long enough to go from various branch lines, to the main sewer line itself. When clogging, cracks, or damage in pipes are located in an area impossible for a human to conduct direct inspection, a drain inspection camera is the most efficient tool to do the job. A sewer camera is a popular device among professional plumbers for many reasons:

It can pinpoint a clog or damage

A drain inspection camera eliminates the unnecessary guesswork to locate the exact point where the clog or crack occurred. This makes a plumbing repair becomes more efficient, less costly, and less intrusive.

During regular pipeline inspections, a drain inspection camera helps a plumber to determine which spots are the most vulnerable to damage. Tiny cracks, holes, and small accumulation of dirt can be located, removed, and repaired, before they develop into bigger issues such as a full blockage.

Plumbing systems in many houses have been in existence for many decades. The pipe can be an obsolete type, and heavily damaged or corroded, so it may need immediate replacement. To make certain of pipe line material, a sewer camera helps a plumber to determine the type of existing pipe and most ideal replacement.

A complex plumbing system may consist of many pipes connected to each other in a complicated design. A drain inspection camera helps figure out the connecting point, and location of hidden branch lines. For pipelines buried deep underground, or located within walls, the camera allows a professional plumber to do repair or replacement tasks without having to demolish or excavate large sections of your walls, floors, or grounds. Simply put, a sewer video greatly alleviates the chance of having to break sensitive areas of your property if  repair is required. 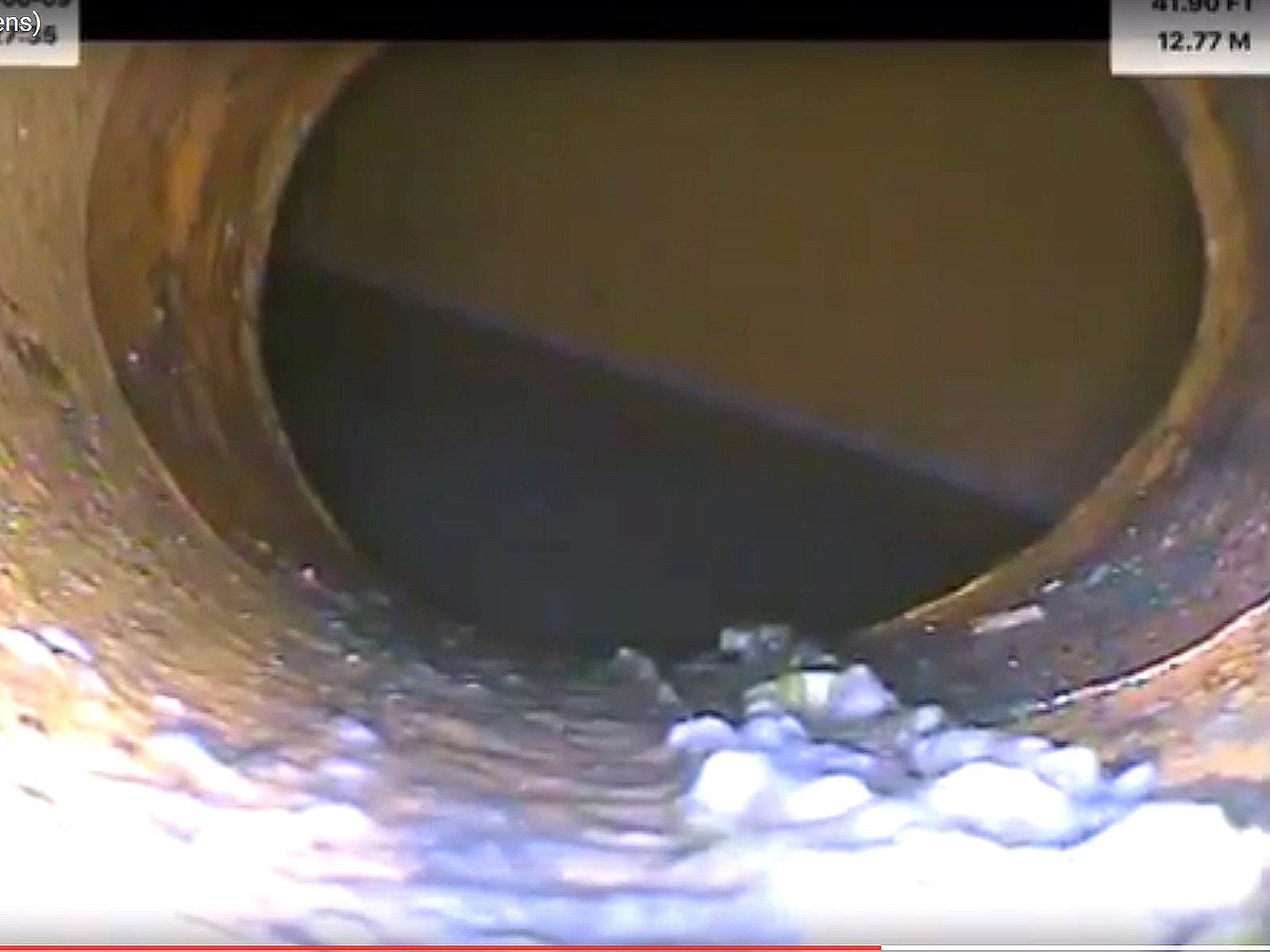 Video view of an actual connection to a NYC sewer

Before a newly installed pipeline can be used, a drain inspection camera helps check for possible issues and verify that the installation is properly done. After a repair job, plumber can also check if the pipe is ready to use, and free of any leftover sediment of debris..

Since a drain inspection camera is designed to work underground in a relatively hostile environment, the housing must be tough enough to withstand accidental bumps. Noteworthy is that it has dependable lighting to produce viewable videos on the connected screen; a poorly lit video would serve little purpose. More advanced cameras also have a gyroscope to maintain proper orientation at all times. In the event it rolls over in the pipe, the device can automatically restore orientation to record an easy-to-analyze video. In terms of video recording functionality, a sewer camera may not be different from a typical camcorder, but they are not intended to be a substitute for each other.

In the old days, a drain inspection camera used to produce only black and white videos; and the footage was stored in VHS media. The next “big thing” was a DVD burner, but it is now gone form popular use as well. Newer models, as stated previously, are equipped with a memory card slot. It is fairly small, but has a large data capacity. All videos are automatically written to an external SD card and can be copied to a computer or a laptop. Another good thing is that an SD card is rewrite-able, which means it can be used for many years before it runs out of write/erase cycle. Moreover, an SD card is affordable, considering it can last for a decade or more. The footage can be attached to an email, or uploaded to the Internet for everybody to watch. A professional plumber may need to show the video to clients as proof of proper repair or replacement.

Some advanced models of  drain inspection cameras come with pipe locator device, which functions similar to a GPS tracker. When activated, the screen display indicates the distance, and the depth as well. The indicator is usually an arrow pointing to the pipe location, so the technician/plumber can follow the direction. Thanks to the depth information, a plumber can determine what kind of tool to use for the excavation; whether it is a shovel, backhoe, or something more powerful for deeper pipe.

A professional is best qualified to use a drain inspection camera. Although there is little risk of injury, a professional plumber will know what to do if something goes wrong, when plumbing damage is found, or to prevent damage to valuable tools and equipment.